Wallbridge Intersects 12.70 g/t gold over 2.71 metres near the Fenelon Deposit 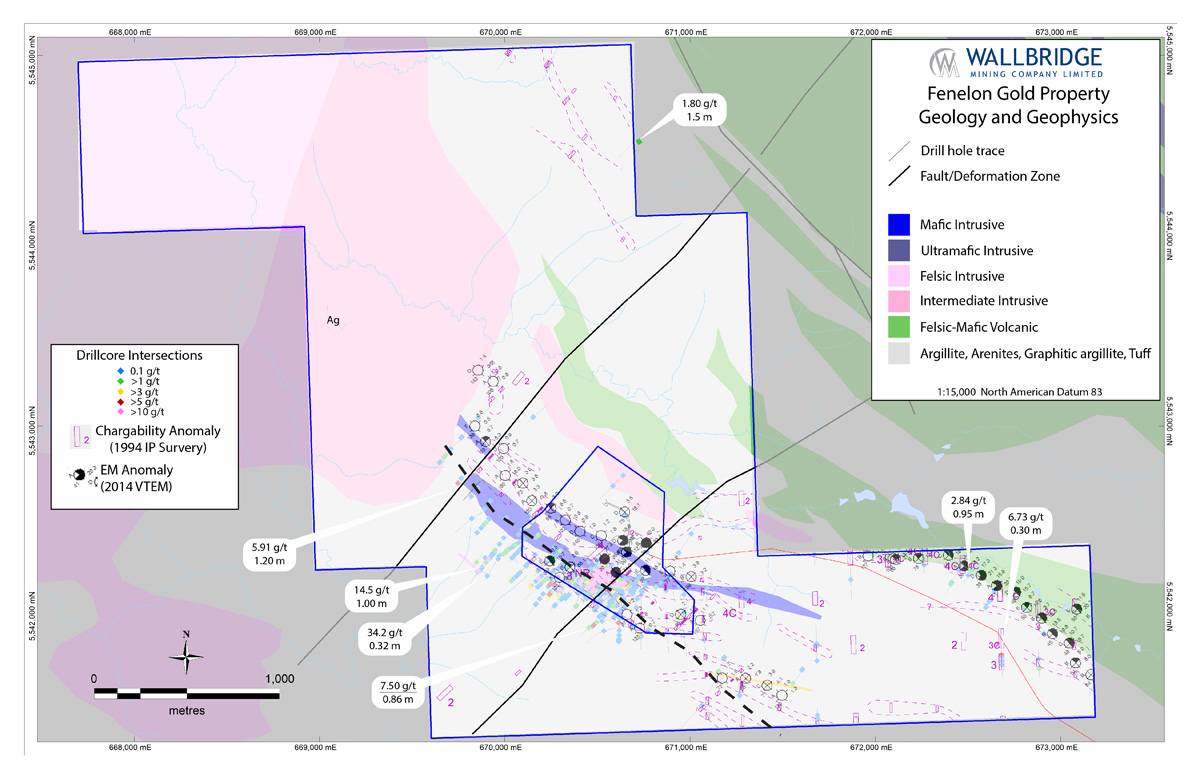 Wallbridge Mining Company Limited reported positive drill results that have extended a known gold zone and have identified an entirely new gold zone with many similarities to the main deposit at its 100%-owned Fenelon Gold Property.
Wallbridge's latest drill results show  12.70 g/t gold over 2.71 metres within the newly discovered broad gold mineralization 300 metres Southwest of the Fenelon Deposit.
The results are from Wallbridge's 2018 drill program.
Fenelon is located in northwestern Quebec proximal to the Sunday Lake Deformation Zone (SLDZ) which also hosts the Detour Gold Mine in Ontario, and Balmoral Resources' gold deposits at Martiniere. Fenelon hosts the Discovery Zone gold deposit and surrounding 4 km strike length of a gold-hosting secohighlights of received assay results from the surface exploration drill program are as follows:
Drill hole FA-18-051:
1.02 g/t gold over 24.59 metres, including 3.13 g/t gold over 4.78 metres which includes an interval containing visible gold that assayed 9.90 g/t gold over 0.54 metres, and 12.70 g/t gold over 2.71 metres included within a wider interval of 3.93 g/t gold over 9.96 metres both hosted within an approximately 200 m wide so far unknown package of favorable mafic-ultramafic host rocks with broad low-grade gold mineralization throughout.
Drill hole FA-18-040:
19.18 g/t gold over 0.58 metres in the Cayenne zone, extending this zone approximately 100 metres to the Northwest, and 3.08 g/t gold over 3.27 metres in a new zone at depth in the Tabasco South area of the SLDZ.
"These results are significant as they continue to show the considerable potential that exists to increase gold mineralization beyond the known zones at Fenelon along the four-kilometer strike length of the gold-bearing corridor," said Marz Kord, President and CEO. "The new zone intersected in hole FA-18-051 is located several hundred metres away from the main deposit and has very similar characteristics to the existing deposit."
"The discovery of this broad gold mineralized system in a so far unknown gabbroic intrusion at depth in hole FA-18-051 is very exciting. This new mineralized system is made up of a stockwork of gold-bearing veins surrounding more focused higher-grade shear zones which are similar to the ones found in the main deposit," stated Attila Péntek, Vice-President, Exploration of Wallbridge. "This discovery lines up well with a strong break in the airborne magnetic signatures, indicating a significant northwest-southeast trending structure, as can be seen in Figure 3 of this release. This structure also appears to control other, so far isolated, historic gold intersections and represents an entirely new exploration target for our 2019 drill program."
Wallbridge's 2019 drill program is now underway with one underground drill rig and one surface drill rig to follow at the end of February. The first two drill holes of the underground resource drill program (19-5150-003 and 19-5150-001) have intersected visible gold.
Assay results from seven underground drill holes and ten surface drill holes are pending.
Wallbridge also announced a $7 million placement with the Eric Sprott company. The no-brokered private placement financing  consists of up to 29,166,667 common shares at a price of $0.24 per share for gross proceeds of up to $7,000,000 to Eric Sprott.
Wallbridge shareholders will vote on the offering at the May 8, 2019 shareholders meeting.
Wallbridge is currently developing its 100%-owned high-grade Fenelon Gold property in Quebec with ongoing exploration and a 35,000 tonne bulk sample. Wallbridge is also pursuing other additional advanced-stage projects which would add to the Company's near-term project pipeline. These discussions benefit from the operating capabilities Wallbridge demonstrated by safely and efficiently mining the Broken Hammer deposit in Sudbury, which was completed in October 2015. As part of this strategy, the Company recently optioned the Beschefer Project, an advanced gold property with proven size and grade-potential near Fenelon Gold. Wallbridge is also continuing partner-funded exploration on its large portfolio of nickel, copper, and PGM projects in Sudbury, Ontario, with a focus on its high-grade Parkin project.
For complete results of the 2018 drilling program at the Fenelon property and other Wallbridge projects click on the link.
http://www.wallbridgemining.com/s/fenelon.asp