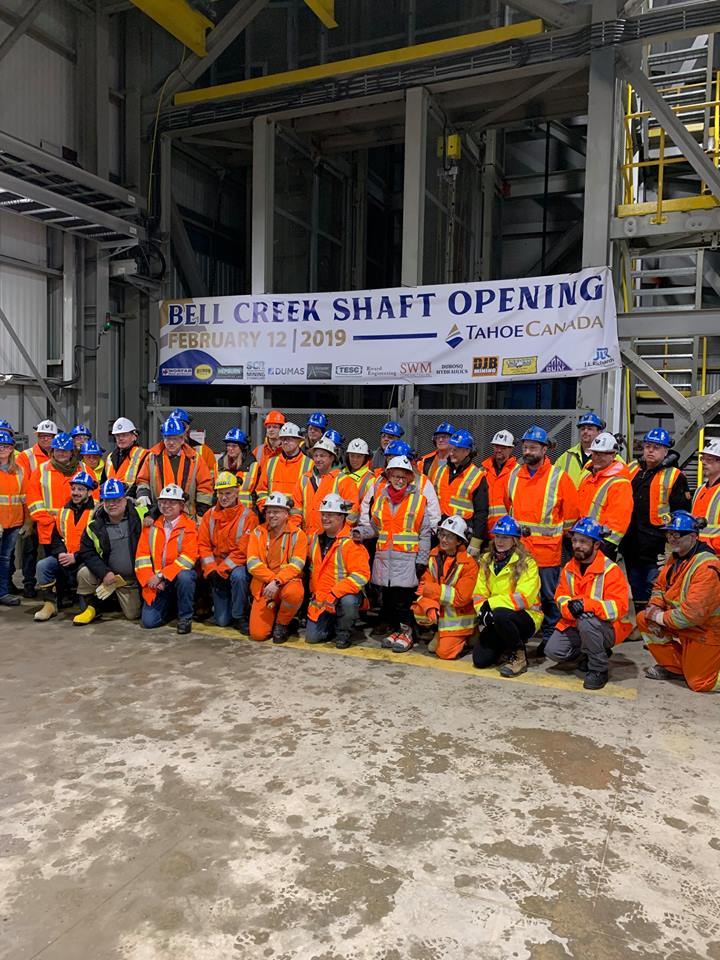 Tahoe Resources officially opened its new shaft at Bell Creek mine in Timmins and with it an expected immediate increase in productivity.
The new shaft was replaces an historic 300 metre shaft and deepened it to 1,080 metres
.
“We’ve now taken the shaft down to a thousand (1,080) metres and that creates a whole new environment for us here at Bell Creek -  productivity will go up, costs will come down and we can increase our production rate,” said  Peter Van Alphen, vice-president of operations for Tahoe Canada.
The shaft deepening involved demolishing the old infrastructure for the 300 metre shaft and the construction of the new infrastructure which included a cage to take work crews to the 1,080 metre level.
The shaft replaces a ramp that used trucks to carry workers to a depth of approximately 1,200 metres. Using trucks to was inefficient and took longer to bring workers to work area. The new cage in the new shaft takes 4 minutes.
The project of sinking the new shaft took two years and $100 million to complete.  Van Alphen said Tahoe directly employs a little more than 200 at Bell Creek. Including contractors, they have about 670 workers in the camp as a whole.
According to David Bernier, Manager of Bell Creek complex, the deeper shaft will double Tahoe Resources production from 40,000 ounces per year to 80,000 ounces a year from the Bell Creek operations.”
Bell Creek is expected to have a mine life to 2025, but mine management believes there is a potential to increasing the mine life. The new shaft can be extended to 2,000 metres to access additional ore in the future.
The official opening took place with guests including Timmins Mayor George Pirie, Timmins MPP Gilles Bisson and MP Charlie Angus, municipal councillors, representatives from Timmins Development Corporation and post-secondary schools. Also present were representatives of Pan America Silver, the company that reached an agreement in November, 2018  to purchase Tahoe Resources for $1.08 Billion cash and stock transfer deal.
The transaction and the change in ownership will not affect the current  operations and its philosophy of increased production and productivity at the Timmins operation.
Photo appears courtesy of Timmins Chamber of Commerce