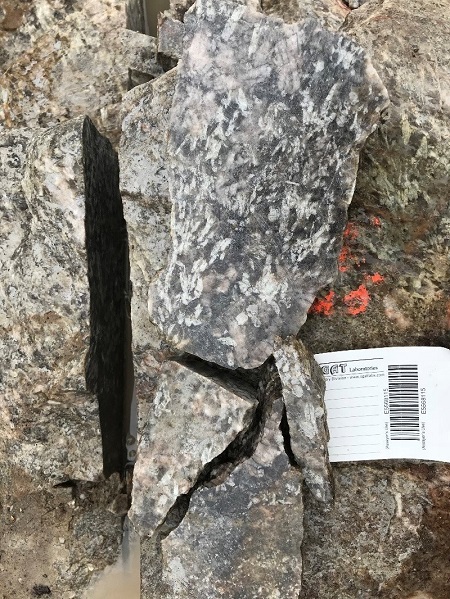 Rock Tech announced assay results from a trenching and channel sampling program completed on the McVittie area of its Georgia Lake lithium property in the Thunder Bay Mining District of Northwest Ontario, Canada. The sample results found 1.56 percent lithium  from 0.88 to 1.19 percent to One channel sample returned 1.56 percent lithium over 1.20 metres.
The trenching program, following up on the positive results from the Company's Preliminary Economic Assessment announced October 2, 2018, suggests the main McVittie lithium-bearing pegmatite extends further to the north than previously understood.
Pegmatite is an igneous rock, formed underground, with interlocking crystals. Pegmatites are the primary source of lithium. Furthermore, the northern extension exhibits greater width than sections of the pegmatite previously sampled in the south.
During the program, a separate lithium-bearing pegmatite to the east was also traced along strike further to the north than previously thought.
"These results bode well for future resource definition drilling as they increase the number of potential drill targets," said Martin Stephan, Rock Tech's CEO. "Increasing the dimensions of the main McVittie lithium-bearing pegmatite, in addition to a separate lithium-bearing pegmatite to the east, supports our hypothesis that the McVittie area could host an additional main resource zone at our Georgia Lake property."
"Late last year we completed two channels in the McVittie area that demonstrate the continuation of lithium mineralization to the north and east of the inferred resource defined in the region," said Dirk Harbecke, Rock Tech Lithium's Chairman. "The results will be added to our extensive exploration database and used to formulate near-term drill plans as we begin preparations for a feasibility study."
Two channels were completed during the program with channel #1 completed to the east of the 2016 channels and channel #2 completed to the north, in an area previously prospected by the company.
The McVittie pegmatite, located south of the Nama Creek pegmatite which hosts the majority of the Company's NI 43-101 resource estimate, was the focus of a drill program conducted in 1955 and 1956. In total, twelve (12) holes were drilled over 544 metres.
During 2016, ten (10) channels were cut and forty-seven (47) samples taken during a trenching program. The purpose of the channels was to gain information on additional pegmatites observed on surface and to better calibrate future exploration programs. The McVittie pegmatite hosts an inferred resource estimate, prepared in accordance with NI 43-101, of 670,000 tonnes (the Technical Report with resource estimate is available on the Company's website and on SEDAR).
The samples were analyzed by Actlabs, an ISO 9001:2008 certified analytical laboratory located in Geraldton, Ontario.
All scientific and technical information in this news release concerning the Georgia Lake lithium property was reviewed and approved by Karl Stephan Peters, EurGeol 787, a qualified person (QP) as defined under National Instrument 43-101.
The company also announced that it intends to extend 1,395,000 stock options, due to expire on July 18, 2019 (45,000) and December 20, 2019 (1,350,000), to December 31, 2021. The stock options expiring on July 18, 2019 and December 20, 2019 have an exercise price of $0.93 and $1.50 per share, respectively. The proposed amendment to the stock options does not include any amendment to the exercise price and is subject to the approval of the TSX Venture Exchange.
Rock Tech Lithium is focused on bringing its flagship Georgia Lake lithium project into production. The Georgia Lake project is a lithium-rich pegmatite vein deposit with measured and indicated resources of 6.57 million tonnes grading 1.01 percent lithium Li2O in addition to inferred resources of 6.72 million tonnes grading 1.16 lithium  Li2O. The first PEA for the project, focused exclusively on the main resource area hosting less than 80 percent of total defined resources, was published in October 2018. Highlights from the PEA included a net present value (NPV) of $312 million and an investment return rate (IRR) of 62 percent.
The deposit was discovered in the Thunder Bay Mining district in northwestern Ontario/Canada, close to the Lake Superior, as early as 1955. Rock Tech Lithium has been working increasingly on the property since 2016 – in a market environment, where the trend for electric cars on the international market has been rising steeply for years. Analysts expect that more than 25 percent of newly sold cars in 2025 will be electrified, with the demand for batteries and therefore battery metals such as lithium expanding rapidly.