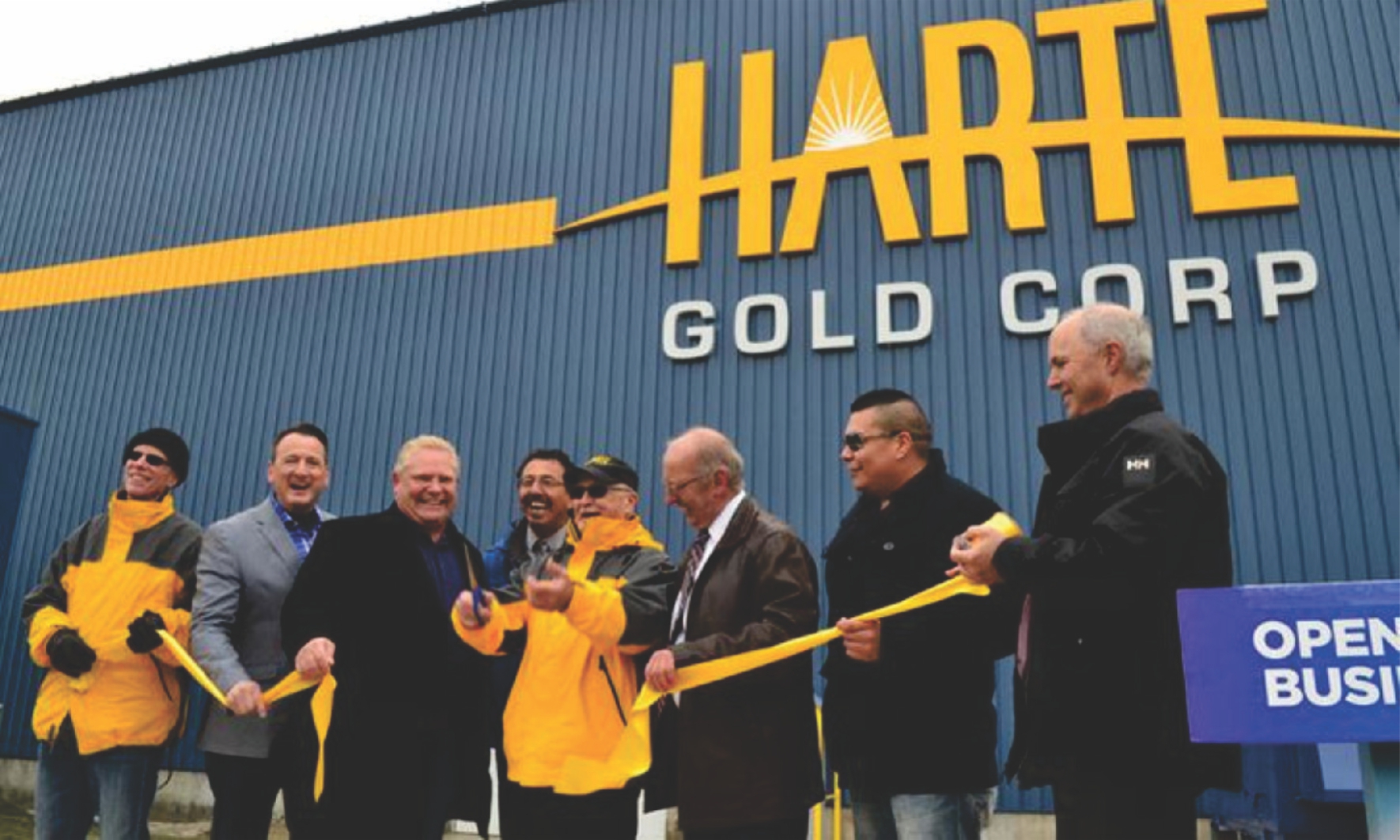 Premier Doug Ford and Minister of Energy, Northern Development and Mines, Greg Rickford were on hand to celebrate the opening of Harte Gold’s Sugar Zone  mine near White River, Ontario on October 24, 2018.

“The opening of Harte Gold’s Sugar Zone mine is a signal to the world that Ontario is Open for Business. It shows that this government is committed to improving the conditions for businesses, so they can thrive. It’s also one more example of why Ontario is a global leader in mineral exploration and production,” said Ford. “We told the people of Ontario we would create and protect good, local jobs all over the province. We will continue to support businesses that are bringing more prosperity and economic growth to every corner of Ontario.”
The Sugar Zone mine is expected to be in operation for over a decade, during which time it could produce more than 900,000 ounces of gold. It will also generate increased activity for businesses that support Northern Ontario’s mining supply and services sector.
In early 2018, a preliminary economic assessment was completed for the Sugar Zone Project and a comprehensive US$70 million funding package was arranged to complete construction.  As of August 2018, construction of the crusher and mill complex was completed, and commissioning started.  Harte Gold is targeting commercial production at the Sugar Zone Project in Q4 2018.
“Opening a new gold mine is a tremendous feat for any mining company, particularly a former junior exploration company,” said Rickford. “Sugar Zone mine will be a powerful economic engine in the region and is a great example of growth and prosperity happening here in Northern Ontario.”
Mining is key to Ontario’s continued economic success as it attracts billions every year in capital, most of which is spent directly in Northern Ontario according to Premier Ford.
The opening took place in tandem with Harte Gold reporting a successful 3rd Quarter along with the official opening of its Sugar Zone gold mine.
“Harte Gold is pleased to report significant achievements toward commercial production,” said Harte Gold president-CEO Stephen Roman in a quarterly update issued on November 15, 2018. “Ramp-up of the mill continues successfully and stope production has now started. We remain on track to declare commercial production this quarter (4th Quarter).”
In his statement, Premier Ford said, the government of Ontario supported Harte Gold’s participation in a number of international investment marketing missions that ultimately led to secured financing. Harte Gold received its commercial production permits from the Ontario government in September and, poured its first gold bar in October in addition to having Premier Doug Ford cut the ribbon at the mine’s official opening.
Sugar Zone’s mine builder, Redpath, has added workers to complete underground ore drift development work which continues at the Sugar Zone’s North and South ramps. During September, the average advance rate of eight metres per day was ahead of plan.
The processing plant was commissioned in early November and it’s now running at its permitted capacity of 575 tonnes per day. The company is now applying for permit amendments to operate at 800 tpd in the first quarter of 2019.
In addition to developing the underground mine, Harte continued to explore the site for additional deposits and completed 90,000 metres worth of drilling in and around the mine.
With 83,850 hectares at their disposal, the company said it has a “significant greenstone belt” to explore.
Infill drilling was conducted at its Sugar Zone and the neighbouring Middle Zone with the aim of shifting their inferred mineral resources into the indicated category.
An updated mineral resources estimate and a mine plan for these areas is expected in early 2019.
The last mineral resource estimate showed an indicated mineral resource of 2,607,000 tonnes grading 8.52 grams per tonne (g/t) for 714,200 ounces contained gold and an inferred mineral resource of 3,590,000 tonnes, grading 6.59 g/t for 760,800 ounces contained gold, using a 3 g/t gold cut-off.
There’s also some step-out drilling underway to follow the trail of gold mineralization at its Sugar, Middle and Wolf Zones. With 30,000 metres of drilling in the books, the company thinks its Fox Zone is an area of potential mineralization.
The Sugar Zone Property (“Sugar Zone”) is located in Ontario, approximately 80 km east of the Hemlo gold camp and 24 km north of White River off the Trans-Canada Highway (#17).  The Sugar Zone property is comprised of 83,850 hectares covering a significant greenstone belt.  Harte Gold holds a 100% interest the property.
Harte Gold is currently in the final stages of advancing the Sugar Zone Project to commercial production.  In 2017, Harte Gold has successfully mined approximately 100,000 tonnes of mineralized material to-date, through its Advanced Exploration Bulk Sample and Phase I Commercial Production programs.
Since it’s official opening of Harte Gold’s Sugar Zone, commercial production has commenced as of January 1st 2019.
During that time the mill had a 90.8% recovery rate.
A 2019 budget and mine plan is under way and will form a feasability study targeted for the first quarter of 2019.