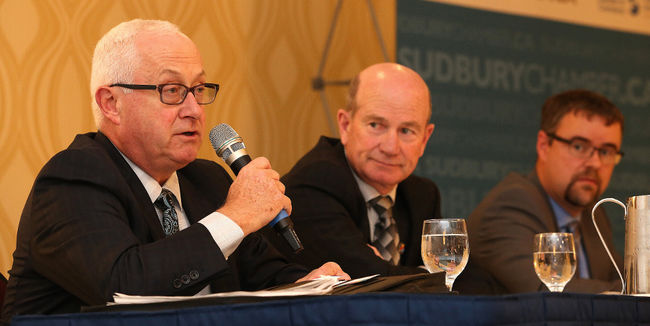 By Keith Dempsey, For The Sudbury Star Geoff Fisher makes a point as Chris Laking looks on during the Greater Sudbury Chamber of Commerce leadership luncheon on proposed tax reforms in Sudbury, Ont. on Monday October 16, 2017. Gino Donato/Sudbury Star/Postmedia Network The voice of small business, apparently, has been heard, a Sudbury forum was told Monday. Michael Macnamara, chair of the board of directors for the Greater Sudbury Chamber of Commerce, said the federal government has shown it is willing to work with businesses “to a certain degree,” but that more needs to be done. “(They’re) scaling back some of the drastic (tax) changes that they were already proposing and, so really, the key message we’re trying to get across to our members is to speak up and make your voice heard.” Macnamara was referring to an announcement Monday that Ottawa plans to cut the small business tax rate from 10.5 per cent to nine per cent by 2019. The move is an attempt to quell backlash to proposed tax reforms that have hit the Trudeau government. The drop, first announced during the lead-up to the 2015 election campaign, would first lower to 10 per cent on Jan. 1, 2018, and then down to nine per cent on Jan. 1, 2019. The Liberals promised during 2015 election campaign to drop it from 11 per cent to nine per cent over three years, but have only cut it by a half per cent. The plan to cut it further is a dramatic move as Ottawa tries to find its footing with tax policy after announcing this summer the proposals, which didn’t sit well with the business community. They had aimed at limiting the ability of incorporated business owners to shift income among family members to benefit from their lower tax rates, shelter money in passive investments within a corporation, and convert income into capital gains, which would be taxed at a lesser rate. The latter measure will now be dropped. Only a couple hours prior to the announcement, Chris Laking, president of Laking Group, Geoff Fisher, of KPMG, and Cleo Melanson, of Freelandt Caldwell Reilly, discussed the proposed changes to corporate taxation during a luncheon at the Radisson Hotel in Sudbury on Monday. Laking said it’s important for small businesses to have a voice in opposition to some of the government’s tax proposals. “(The proposed tax changes to corporate taxation) is punitive, they’re discriminatory and they’re looking, really, at affecting how small business is going to operate in this country in the future,” Laking said. “A small business is a mom-and-pop operation, or some that has several employees, they’re all painted with the same brush, and it’s going to be more difficult with these tax propose changes for small business to develop in the first place, and to create any sort of wealth. “Wealth isn’t a bad name. You have to create wealth to promote growth and success in this economy.” Source: http://www.thesudburystar.com/2017/10/17/wealth-isnt-a-bad-name-sudbury-forum-told