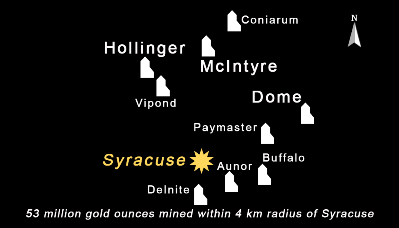 By Gregory Reynolds
The Porcupine Mining Camp has been prospected, explored, probed and drilled more than any other mining region in Canada but a recent discovery has proven there is always something that was missed.
The Syracuse Gold Project is centred on about 40 acres located on Gold Mine Road near the heart of the City of Timmins. Syracuse Gold is a private venture located in Sudbury that has acquired the property that shows visible gold, says CEO David Foreshew. “It is special in many ways with differences that are measurable when compared to other exploration projects. The location, potential and the area’s infrastructure set it apart.
The project is 100% privately owned, strategically situated on one single mining claim never having been part or parcel of any surrounding mining entities that combined have produced over 53 million gold ounces from similar mineralized structures.
The property is comprised entirely of outcrop and sub-vertical mineralized structure. The dilation within the NW-SE linear shear strikes diagonally through the property for approximately 500 metres.
The claim appears to contain the entire structure and was overlooked for a century of continuous mining,” he says.
Foreshew says the owners are hoping to obtain a joint venture partner or even to sell the claim.
The project has a Hollinger Gold Mine style foot-print both in size, potential and basalt anatomy. It is between the Hollinger and Dome Gold Mines, he says.
This structure is genuine, discovered in 2008 and never drilled until 2011.
At present the project is at early stage status with opportunity to create significant value. Both surface and patented mineral rights are owned, he says. Guy Royer P.Geo , B.Sc. was first on site at Syracuse in 2008 and he spent 23 days at Syracuse in spring 2014. Some of Royer’s observations are as follows:
• Syracuse vein system discovery within loci of Canada’s largest gold endowment. 53 million ozs within 4 km radius of this new vein unit.
• Key deformation, suggests deep potential mantle suture. Winged clasts, a distinct strain feature throughout the structure give evidence to support a transpressional deformation model that resulted in tectonic block-up. These events have created porosity, extreme permeability and voids to depth, a prerequisite for large scale vein formation. This tranpressional interpretation may also explain vein orientation and the near vertical aspect of the structure and vein unit.
• Completely new quartz carbonate discovery. To date 500 metres of BQ geological drilling proves pervasive veining to depth (deviation in azimuth and dip has likely occurred as these holes were not measured).
Foreshew says “in May 2012, surface blasting exposed the number one extension vein. This vein runs parallel approximately 40 metres from an inner zone within a broader 70 metre wide shear.
Number one extension vein is evident at surface for a minimum 100 metres of north contact. Number one vein has never been drilled to date,” he says.
Foreshew says “gold veins at Syracuse were first discovered in 2008, representing the only new vein system discovered in nearly a century within the core mining complex. The footprint at surface is now very similar in all aspects to the cluster’s largest mines.
Presently seven continuous parallel vein sets of different age and composition are exposed and traceable on outcrop. Several sets are exposed and traceable for 700 feet each and continue into overburden on each end.
Combined, thousands of feet of vein exposure have been revealed. The shear sequence comprised from central series basalt hosting these veins is minimum 100m wide striking strategically on the property for about 600m,” he says.